Future generation and our planet, image by Gerd Altmann

Are you aware that American kids eat 208 million pounds of raisins each year? That is a lot, I think. The problem with this is that 84% of samples tested this year by EWG, to compile their Dirty Dozen list for 2020, were contaminated. The tests documented that residues of neonicotinoids were found on these samples.  These are bee killing pesticides and new studies suggest it can harm the development of the nervous systems and the brains of children.

The Center for Disease Control, CDC found that 50% of tested kids between 3 to 5 years old had this bee killing pesticide and it was detected in 30% of adults. Staggering figures and well above the number that were previously thought. The exposure to neonicotinoids (neonics) is much more expansive than previously estimated. 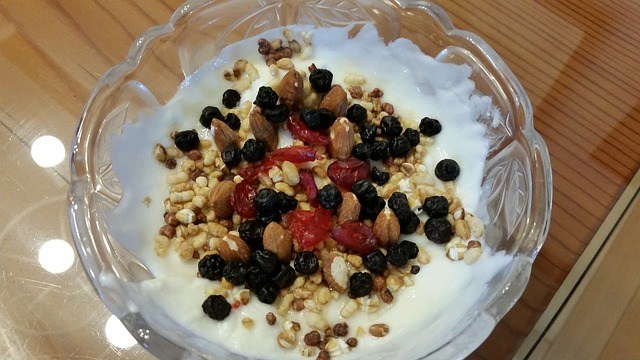 According to the Environmental Protection Agency’s own web page, the agency was established in 1970 to “establish quantitative “environmental baselines”–critical for efforts to measure adequately the success or failure of pollution abatement efforts.”

Lately, the EPA has failed in their obligation to care for your health and the health of the environment. They are doing a very poor job and are even siding with the chemical industry in many instances. This is completely the opposite of what they should be doing, putting money ahead of human health.

The Agency was given the capacity to, and I quote;

Recently, the EPA has changed a lot of things, from their views and the implementation of their own safety rules, to studying the real issues affecting the environment. They (the EPA) were given the mandate and the ability to study pollution independently from industry, and to report relevant findings that are grounded in fact-based research and not financially motivated dogma from company run labs.

Recently they declared that glyphosate is safe as it does not pose a risk to human health. Completely going against the growing scientific evidence that links glyphosate to a rise in human cancer rates. Right now, 42.000 Americans are suing Monsanto-Bayer because their glyphosate products play a roll in developing cancer, but the EPA says pesticides are safe.

The EPA had planned to ban chlorpyrifos, which is a neurotoxic pesticide. The manufacturer had announced plans to stop sales in the U.S. because this chemical is so dangerous. It has been linked to the increase in brain damage in children. The EPA turned around and did not ban it.

117 million Americans rely on the water from rivers and surface waters, but the EPA repealed the drinking water protections. What is happening here? Mother Earth is less protected and people are getting sicker?

The EPA also rolled back the Clean Power Plan. What was the result of this? Up to 4500 more premature deaths and 150.000 more cases of asthma.

The following book is a wake-up call to all humans as our survival is in jeopardy. Taking a unique perspective, Planetary Overload of Earths forcefully points out the consequences to human health of ongoing degradation of Earths ecosystems.

This is an alarming and eloquent book and of significant interest to environmentalists, public health professionals, policy makers and all those who care about people and the earth. 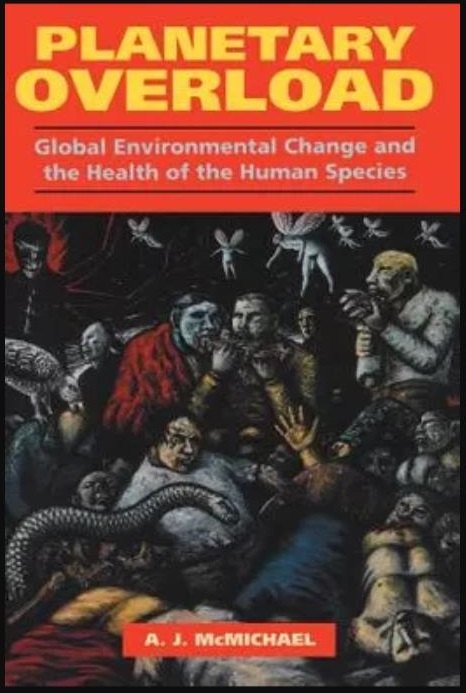 The importance of bees

Let us not forget that we need bees. Honeybees are responsible for 1 in every 3 bites of food. When they are poisoned they cannot work anymore. Last year beekeepers lost nearly 50% of their hives. Even if there is only a small amount of “neonics” around the bees, it interferes with the navigation system bees have, so they get lost.

Other species like songbirds are affected as well. They do not have the right weight and then cannot migrate as they lack strength, or the migration is delayed. 75% of songbird species is in decline. We went through the DDT application and with Rachel Carson “Silent Spring” (1962), we were able to overcome corporate greed because we all recognized the value of birds and eliminated this pesticide from use in the U.S. Can’t we learn from our past and find a healthier alternative for pest control?

Now, sadly, the Monarch butterfly is also on the list of creatures in decline. The U.S. Fish and Wildlife Service has decided to not add the Monarch butterfly to the Endangered List.  They stay overwinter in Mexico and this year’s count has shown a 53% decline compared to last year. Roundup is killing them and their habitat. The milkweed plant is the only food source for young monarchs and Roundup kills so many things, it might be easier to find out what it does not kill.

There you see, bees, songbirds, the entire creation of which we form part suffers the consequences of a malicious invention that lines the pockets of the chemical industry. The Trump administration is protecting the pesticide industry profits. That goes at the expense of people, pollinators and our planet. 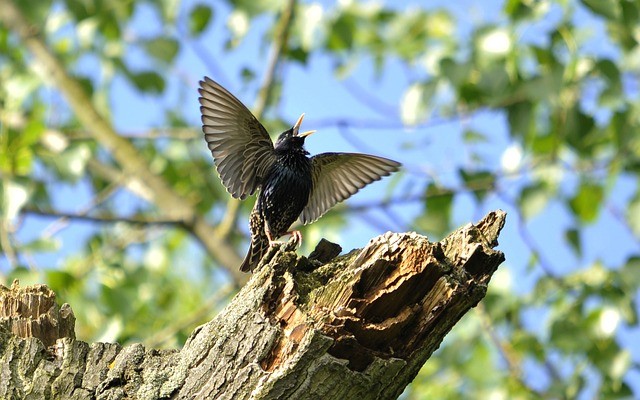 A Star singing in the forest, photo by Dieter Seibel

The clock is ticking. It is estimated we might have a slim 10 years to avert the worst impact of climate change. How does one do that? To stand a chance, we need to keep 80% of known fossil fuel reserves in the ground. That poses a problem as the Trump administration backs the expansion of pipelines, drilling and the construction of new wells.

One of those huge environmental disasters waiting to happen is the Atlantic Coast Pipeline. The APC will transport fracked gas across rivers and wetlands, and this construction plan might include national forests like the Monongahela and George Washington, as well as running across the Appalachian Trail and the Blue Ridge Parkway. A huge environmental disaster in the making.

This is an interesting YouTube video that explains the current situation on the Arctic National Wildlife Refuge. This place needs to be protected for future generations.

The Arctic National Wildlife Refuge has been targeted by oil and gas companies for development. It does pay off to protest and a success can be noted. In 2019, hundreds joined Gwich’in Nation Leaders at the annual shareholders’ meetings of big banks and oil companies. It had a positive result. This spring Goldman Sachs, JP Morgan Chase and Wells Fargo have committed to not finance drilling in the Arctic Refuge.

The importance of trees

Here comes an unusual but important insight. Deforestation is second only to fossil fuels in causing climate chaos. It exposes humanity to unknown diseases. We now have the coronavirus which has brought the world to its knees. Rules imposed by governments have put a stop to daily life, with all the consequences included. I am not discussing if these rules were right or wrong; it is something else which caught my attention.

We have lived on planet earth like military tanks, waltzing down whole ecosystems. These ecosystems that naturally regulated diseases and protected human health. We have caused a great imbalance. By stealing vital habitats, the natural barriers between humans and disease carrying animals are gone. They say ecological disruptions to be responsible for 75% of all new infectious diseases that originate in animals. 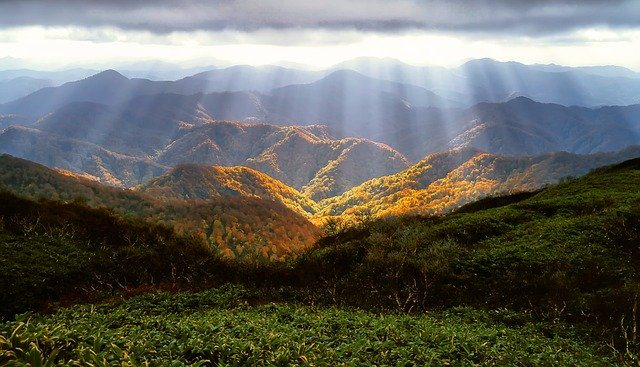 There obviously are many more connections, but I think all the above is more than enough to make you think. When Mother Nature gets abused, things go out of balance. Fauna, flora and humans are all part of the one, we are all connected. Being responsible with all the gifts we have been given would re-establish harmony on earth. Our health would improve as well as our environment. Only in a few months, while we were staying at home, Mother Earth has shown us recuperation is possible. Let’s treat her with more respect, and everybody and everything will benefit from it.

I have made a special page for you with some recommendations. It is a mixture of things I like so please have a look at Recommendations. I hope you will find something of your interest.

Source: Newsletters of March and April 2020 from EWG and Friends of the Earth.

Nature holds many wonders, and one of them is butterflies. Have you ever been to a butterfly park? I have visited 2, one in the U.S. and the other one on the Costa del Sol in the south of Spain. You might like to read the following post.

The ecosystem of the world is in balance and us humans are making the system unbalanced. The problem is that we humans need to eat in order to survive, but this means we need to produce food in a responsible way. This means we must not affect the local wildlife, protect the bees and adapt the way we farm.

The question that has been asked a number of times is can you get the necessary food without relying on insecticides; some will say yes and others no. I think we neeed to do more research to come up with pesticide, fungicides that are plant based that do not harm the environment, or bees but help the control the many pests. It is not easy but in the future, it may be possible.

We all need to change.

Thank you for stopping by and for your comment. I hope you downloaded your free PDF? Tulip widget.

I hope that this Covid19 has taught us a lesson. If we behave in a more responsible way, everything and everybody could benefit from it. I also think that our world will change considerably after we go back to “normal” as that normal will not come back anymore.

The heavily spraying of the crops is putting poison in our food and in the environment. We really should find better ways to manage everything. Going organic is the best option as I am experiencing on my little farm. I like to get older and remain healthy and up till now that functions nicely.

Hey nice article you have there. Indeed, our health is tied to the earth. How we treat our environment will determine our well-being. Afforestation should be encouraged because of the huge health benefit we derive from trees.

Pesticides have a negative effect on bees, users of pesticides close to a bee farm should always inform farmers of their intentions of using pesticides in order for the farmer to take necessary precaution.

That is one of the many problems, the overuse of pesticides. You cannot hinder bees from going places so they will fly to contaminated areas. Pesticides linger for a long time and bees bring it back to their hives. Over time, it accumulates and becomes deadly.

The same applies to humans. Eating poisoned food once might not be a health risk, but over time it accumulates in the body and causes all kinds of illnesses. We would be much better off without all this stuff.

Treating Mother Nature with more respect would be of benefit to all, including future generations.

Thank you for your comment. I hope you downloaded your free PDF? Tulip widget.